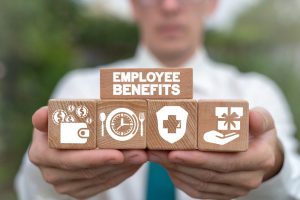 The Roots of Self  Insured Benefits

Group health insurance benefits in America largely originated near the end of World War II after the federal government began allowing the cost of these benefits to be tax deductible.   This change in tax code would have a profound effect on the financing of America’s healthcare system.

Initially, the employer would pay for workers’ medical expenses (“claims”) out of cash flow.  Because costs could vary widely from month to month, only large corporations had sufficient cash flow to bear the risk.  Many larger employers still operate under this arrangement (called “self-insured”), since it is less expensive in the long run than paying an insurer to carry part or all of the risk.

With increasing healthcare costs, most small and medium sized companies were unwilling or unable to take on the risk of paying catastrophic health care claims, which could run from hundreds of thousands of dollars into millions.  To manage this risk, most small to mid-sized companies turned to an insurer for a group health insurance plan.  The insurer carries the risk of claims (for a significant fee) in excess of copays, deductibles and coinsurance and generally also administers the claims processing (for an additional fee).  The aggregate fees an insurer charges for a fully-insured plan are the premiums.

Traditionally, the insurance carriers would not offer a policy to a new client company without first gathering a detailed survey of the employees’ health conditions.  This allowed the carrier’s medical underwriters to estimate the expected level of claims and price the policy such that the insurer would expect to profit from the plan.  This is called rating.  Companies with healthier employees would pay less in premiums than companies with poorer overall health.

For companies renewing their group insurance plan, the insurance company underwriters would use actual claims experience to set the premiums for the following year.  This is called “experience rating”.  In some cases, such as when coming up for renewal after a year when many large claims were submitted, the insurance company would raise the premiums to beyond what the employer could afford, or even deny the renewal of coverage entirely.

The Affordable Care Act (ACA)  requires small group health insurance (up to 100 employees) to be priced according to the demographics of the employees, i.e. age, tobacco use, location, and family size.  So, the ACA requires insurers to use community rating for small groups as well as individuals.  With community rating, small employer groups with employees having pre-existing conditions have premiums no higher than other groups with employees of the same age, etc.  Small groups also can no longer be denied renewal coverage due to claims submitted.

Before the Affordable Care Act (ACA), a small company whose employees were unusually healthy would receive a favorable rating and pay less than average for their premiums.  Now, with community rating required by the ACA for groups that range from 2-100 employees, healthier groups pay the same amount a much less healthy group would pay, regardless of its health status.

It is important to understand that the small group health plan restrictions under the ACA only apply to fully-insured plans.  Self insured health plans are governed by the Employee Retirement Income Security Act (ERISA).  ERISA preempts state insurance regulations, so multi-state companies with self-insured plans need only comply with ERISA.

Since small group self-insured arrangements are not regulated by the ACA, community rating is not required.  In fact, medical underwriting, including employee health questionnaires and experience rating, is always required.  As a result, the monthly cost to a small employer with a healthy group can be lower than an ACA-regulated fully insured plan, by as much as 30% or more.  Additionally, there have been a number of innovations that have made self insurance more accessible to small and medium sized companies.

Some healthier small to mid-sized companies recognized that the ACA plans did not reward them for having a healthier group of employees. One of the challenges that kept these businesses out of self funded plans was the complexity and cost of managing the payments to healthcare providers.

To make group health benefits more practical for smaller companies, Third-Party Administrator (TPA) services were created, allowing the employer to outsource the management of health benefits. The TPA charges a fee for the service but the risk of excessive bills is still carried by the employer in a self-insured arrangement.

An important innovation for some small and medium businesses is the creation of level-funded self-insured plans.  With level-funded plans, employers make a regular monthly payment (similar to a premium) to a Third-Party Administrator (TPA) which builds up a cash reserve for claims.  Claims are then paid by the TPA from this cash reserve.

However, small groups still needed protection from the risk that really large claims could exceed their claims reserve, so most self-funded health insurance plans include stop-loss insurance to reduce the risks associated with high individual and aggregate claims.  Stop-loss insurance is similar to purchasing high-deductible insurance. The employer remains responsible for claim expenses under the deductible amount. The stop-loss plan can pay for any claims that exceed that amount.

Third-Party Administrator (TPA) underwriters set monthly reserve payments for a level-funded plan to cover projected monthly claims plus a moderate margin.  This margin of excess payments helps keep the cost of the stop-loss insurance down.

If claims are as projected or lower, eventually the claims reserve builds up a surplus of funds.  With a level-funded plan, after a significant period of time passes (like 18 months) and the excess reserves are not needed, the excess amount is returned to the employer.

The Question of Renewal

Because level-funded self-insured plans are not governed by the ACA, their renewals are based upon the prior year’s claims experience and are not guaranteed.  In fact, if claims for the year are unusually high, this may result in an increased premium or non-renewal of the contract.  However, in that situation a small employer could move to a fully-insured ACA-governed plan.  That way they can continue their group health benefits with guaranteed issue and without paying higher than average premiums in spite of their claims history.

Small groups with healthy employees (and less-hazardous occupations) can enjoy lower health benefit costs with a level-funded plan as compared to a fully-insured plan.  By taking advantage of their better health, this can be a significant fraction of the cost of the program.

If the employee population continues to be healthy, the employer will eventually recapture a portion of the claims reserve, which can be a substantial sum.

For a small employer with a healthy, low-risk group, a level funded plan can provide substantial savings as compared to a fully-insured plan, with virtually no downside financial risk when properly structured.  Get a quote for your small to medium sized business and find out if a level funded self insured plan is right for you.