Colorado Is The Leanest State In America 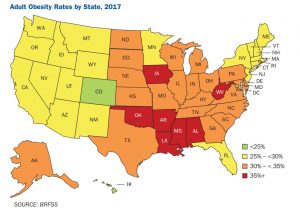 2018 – Colorado is the leanest state in America, according to a new State of Obesity 2018 Report, which is a joint collaboration by to non-profits, the Trust for America’s Health and the Robert Wood Johnson Foundation.

Eagle, Colorado was singled out as the leanest area profiled in the report. Colorado is the leanest state with a 22.6% obesity rate. Hawaii and Washington DC were the only other areas with obesity rates below 25%.

While that’s better than other states, the bad news is that in 2017 the obesity rate stayed level or increased in every state.

Not a single state had statistically significant decreases in obesity rate over the last five years.

Shockingly, in 1985, not a single state in America had an adult obesity rate higher than 15 percent.

There are many health risks associated with obesity, including type 2 diabetes and certain cancers. The State of Obesity 2018 Report estimates that obesity costs an extra $149 billion annually in direct healthcare spending, and another $66 billion in lost productivity.